The ear worm ‘No colours anymore I want them to turn black’ went around and around in my head as I struggled to mix black with the oils I had.  It was soon joined by another ‘You can’t always get what you want…’.  The ear worms spun in my head long after I accepted that I wasn’t going to get a black – and that a rich, interesting dark brown was close enough – and they drove me to paint this! 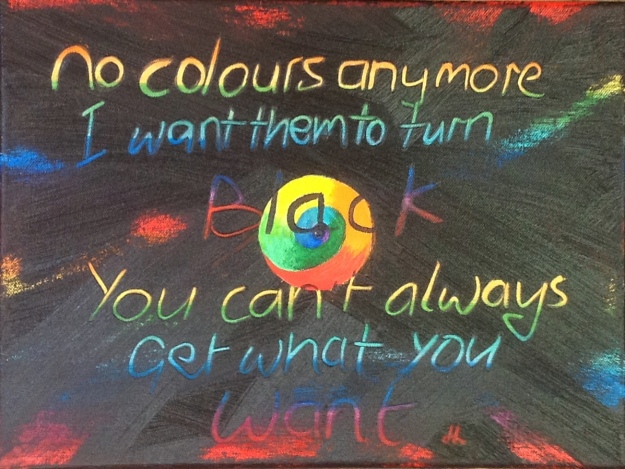 A little different to my usual WA flora themed paintings!

For those interested in how I painted it: I underpainted horizontal stripes in rainbow colours with acrylic paint, after masking out the centre circle.  I then wiped out the rainbow with a hake brush heavily loaded with my dark oil mixture singing Paint It Black (it was okay no-one was around).

I let it dry for a few hours and then scratched out the words with feeling and the end of a paintbrush – but that didn’t work too well so I patiently lifted the oil paint with a brush, wishing my ‘passionate’ handwriting looked more emotive.

Hours later I removed the masking fluid which was now covered in acrylic and oil trying not to disturb the surrounding area – and thinking ‘this was a mad idea’.  My principle of not giving in until I’m finished kicked in and I painted a rainbow of colours spiralling into a black hole within the circle before reinstating the missing parts of the letters over it.

Ha!  Then I received an email about a painting competition with categories addressing mental illness – maybe I’ve an entry already!

6 thoughts on “Geewillingkinwinkins – No Colours Anymore…”