The third in my series of wildflowers I photographed and painted to be part of my WA Rainbow has turned out to be another immigrant – 2 out of 3 so far!

The Beach Primrose is native to North America – California and Oregon get specific mention by Wikipedia.  Control is needed to ensure it doesn’t thrive at the expense of other flora but as far as I’m concerned it still deserves to remain here.  It is  both beautiful and functional – and it reminds me of being by the sea.

– is it’s botanical name but my tongue can’t get around that, nor can my memory, so it remains Beach Primrose to me.  It thrives on sand dunes and sandy roadsides so must be as tough as nails, yet its petals are such a delicate looking lemony yellow they appear almost transparent as they flutter in a breeze.  As well as imparting visual pleasure almost year round, it is good at stabilizing sand.

It captured me so I returned the favour! 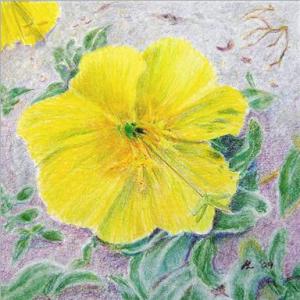 It brings back memories of fulfilling a dream and living near the sea and listening to the sound of the surf as I lay in bed.  I am lucky!

2 thoughts on “Just Goes To Show How Multicultural Australia Is!”