Time is an illusion

said Albert Einstein.  This gives me comfort as I wonder how come January has been and gone already!  Gone before I started my New Year Resolutions, gone before I finished even one painting, gone!

At least I did start a painting.  When going for a walk a tree will sometimes catch my attention and stop me in my tracks as it makes me aware of its individuality, its own brand of beauty and its character.  There is one such tree in the reserve behind our home.  It’s a  Jarrah tree that bears the scars of a long life with a belly that suggests a full and indulgent one.  I fancy that it’s raising a glass and saying ‘Cheers!’ as I walk by and have nicknamed it ‘The Beer Belly Tree’. 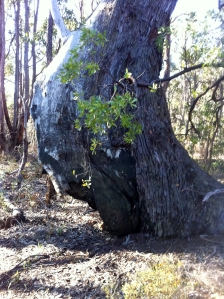 The painting (1m by .75m) will be one of a series so I’m painting it out of context but realistically (in acrylics) so that those that have seen the tree may recognize it – I have no idea why I want to do so!

This is the progress by the end of January:

The Beer Belly In Progress

I’ve many reasons and excuses for not getting further – one is the level of detail messes with my brain!

Some other reasons for lack of progress: the extreme heat during January; a dysfunctional air-conditioner in the studio and the catastrophic bush fire on Sunday January 12th – a day that topped 46 degrees Celsius in the Perth Hills.  The fire devastated 650 hectares and destroyed over 50 homes, two in the west of our suburb, most in the suburb to our West.  It’s heart rendering to see the damage and feel the pain of the bush – fauna and flora – and the people directly affected.  We had to evacuate but were spared the trauma of losing our home where so many memories are stored.  We’ve learned from the experience and will be better prepared if there’s a next time.

As for the bush, it has seen fire before and has also learned from the experience.  Successful flora have adapted to survive and regenerate after fire. I think the Beer Belly Tree is a survivor of a past fire as its base is as black as charcoal in parts.

Despite the awfulness of the inferno on January 12 and its aftermath, I was struck by the beautiful colours and shapes of the blackened tree trunks and the crispy, burnt orange leaves as I drove by a stretch of incinerated bush the other day – and smiled to see the blackened stumps of grass trees already pushing up young, green spiky leaves.

I think the tree is an element of regeneration which in itself is a concept of time.