We made it to Koolkyne yesterday and I met the photo of Greg’s grandfather, Thomas Campbell,  which hangs in the entrance hall of the Grand Hotel.

Thomas was the fourth Mayor of Menzies and the first mayor of Koolkyne.  He also established Campbell’s Koolkyne Hotel in the late 19th century.  He must have been a very able and hard working man.

Like  most other buildings that once graced the gold rush town there is nothing left of his hotel.

His photo indicates that he was a most handsome man and I owe him an apology. 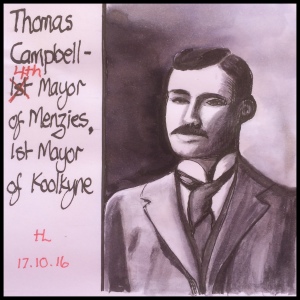