If art was not an illusion would it be a photograph or is that also an illusion?  My head hurts already!

Art has to be an illusion (to me at least) as my sort of art, drawing and painting, is a 2-dimensional representation of a 3-dimension visual world.  The end result may be a close rendition of reality but it is always the artist’s view of it.

What maybe surprising is that these thoughts resulted from discovering that a variety of Kangaroo Paws on our block is a hybrid, so maybe these plants only give an illusion of nativeness.  If a hybrid is produced within Australia from Australian natives does the hybrid get a classification of ‘native’?

I think I prefer to do rather than think (is that a tautology?)!  Here’s the result of my doing ‘Kanga Burgundy” in the Wildflowers at Balligar design theme in pen and watercolour:

Kanga Burgundy is also known as Bush Elegance – and its inelegant name Anigozanthos Rambueleg.  This evergreen, perennial Kangaroo Paw reaches to 40cms tall with beautiful dark purple-red flowers from Spring to Autumn.  Its regal colours and looks belie its tough nature and ability to survive in dry, sunny positions, bringing us back to illusion and onto Albert Einstein who proclaimed:

Reality is merely an illusion, albeit a rather persistent one.

My painting of Kangaroo Paws was precocious and started talking – and telling me what to do – at an early age.  I love that moment when a painting or other ‘work of art’  lets you know that it’s time to put aside all reference materials, draft designs and preconceived notions and time to ‘Listen up!’.

The Red and Green (or Mangles) Kangaroo Paw is the floral emblem of Western Australia and endemic to this state – and Balligar.  Whilst the unopened buds are reminiscent of kangaroo paws, the flowers with six light green filaments and a longer pistil, remind me of Chinese dragons.

Thinking of dragons and the struggle of flora and fauna for survival on our bush block led to the notion of portraying a spat between the native Kangaroo Paw and an introduced weed.  My design however was like the proverbial curate’s egg – “Good in parts.” and the embryo started to talk.  Before I say more here is the painting (1000 x 750 mm) to speak for itself. 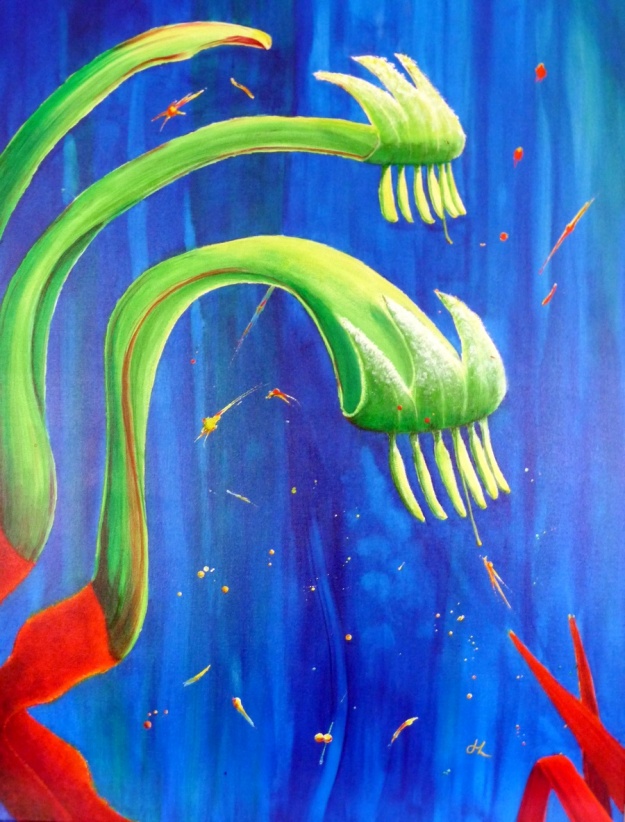 During design it told me that: not all parts were connecting; that the viewer’s gaze would probably be lost out of the lower right corner and there was a big, boring space in the middle!

I responded by attempting to represent pollen and bits of plant material flying in the air as a result of the energetic battle.  I sought to reserve some light, perfectly round, pollen shapes on the canvas by dropping masking fluid on to it.  I don’t think the painting thought this was going to be enough – for when the fluid was removed I was left with all sorts of unusual shapes and I felt instructed to give them a celestial persona.

The acrylic paint dried too quickly in the heat, despite misting and using medium, and I had difficulty in getting the background effect.  In desperation I rubbed at an area with a baby wipe (meant to clean me) and was delighted to find it most effective in gently lifting off just some of the dried paint.  This made it easier to give life to the dragon’s breath!

I hope you enjoyed this painting’s tale ;).

Until next time – Monday at the latest – remember “To look is to learn, if you listen carefully.” – Per Arnold